You are here: Home / Reverse Diabetes / Kirt Tyson of Baltimore, MD Reversed His Diabetes in Under 30 Days, Now He Helps Others Reverse Type 2 Diabetes 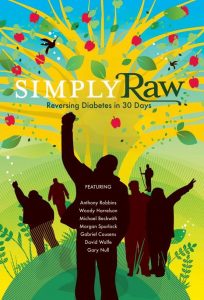 The documentary film Simply Raw: Reversing Diabetes in 30 Days (available to view, free, below) includes first-hand testimonials about the power of whole food plant-based foods (and in this case, raw plant-based foods) to heal the body and, in many cases, reverse type 2 diabetes naturally, in a short period of time.

The film Simply Raw documented the 30-day health transformations of the participants, in most cases reversing diabetes and eliminating diabetes drugs and insulin.

Kirt Tyson accepted the 30-day diabetes reversal challenge in Simply Raw, and he reversed his diabetes in under thirty days, naturally, and got off the diabetes drugs and insulin.

Kirt’s blood sugar tested at over 1,200 (!) (in the E.R. and hospital ICU) when he was first diagnosed with diabetes.

When we first meet 26-year-old Kirt in the film, he described how he learned he had diabetes after he started having to go to the bathroom frequently. He also felt terrible and had blurry vision. He ended up going to the E.R., where the doctor told him that his blood sugar tested at over 1,200. Over ONE THOUSAND! Kirt said the E.R./hospital ICU doctor told him that up to 80-100 or so is normal, but at 1,200 he “should be dead.”

That was the beginning of the diabetes drugs and insulin shots for Kirt, but he hated the drugs and shots and wanted to find a different solution. He said he had tried counting calories, counting carbs, but it didn’t help, and he was struggling to find something that would work to lower his blood sugar naturally.

He wanted to choose a different health destiny, other than a lifetime of diabetes drugs and shots, so he was open to the “Simply Raw 30-Day Challenge” and applied to be a part of the film documentary. 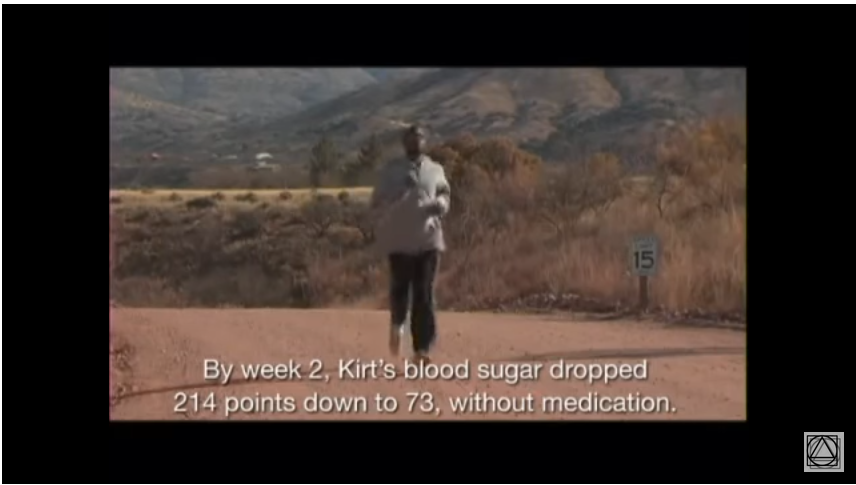 Kirt made a dramatic health transformation and was off the insulin and drugs in under 30 days.

At the beginning of the film (at his home and grocery shopping, and visiting his sister’s home in Baltimore, MD before the challenge began), Kirt already looked fit, slender, and lean. He didn’t seem to have the more overweight body type of a type 2 diabetic. But he had been on insulin and diabetes drugs for several years. He was first diagnosed with diabetes when he ended up in the emergency room and was hospitalized due to dangerous symptoms he had experienced from previously undiagnosed diabetes.

Kirt mentioned at the end of the film that after the challenge, his doctors back home took another look at his previous medical files and determined that he actually had been a type 1 diabetic all along, rather than a type 2 diabetic as he had previously been diagnosed in his early 20s.

But that leaves a question the film didn’t address. During the 30-day challenge in the film, Kirt was able to get off all of the diabetes drugs, and even the insulin.

If he was able to get off all of the insulin, then the viewer is left to assume — because it isn’t addressed in the film — that Kirt must have some level of ability to manufacture insulin in his own body, whereas type 1 diabetics usually are unable to produce insulin.

In any event, by the end of the film, after just 30 days Kirt was off all of the drugs and off the insulin, too.

Kirt Tyson not only reversed his diabetes and got off all of the drugs and insulin, but by the end of the film Simply Raw he explained how this whole experience had given him the desire to become a naturopathic doctor in the future to help other people, and that is exactly what he is doing now.

In the documentary, Kirt Tyson comes across as a kind, helpful, likeable, affable person. If other participants felt discouraged, Kirt went out of his way to help inspire and encourage them, so they wouldn’t give up on their quest to finish the challenge and reverse their type 2 diabetes naturally.

Kirt’s participation in the 30-day diabetes reversal challenge contributed to keeping a positive vibe among everyone participating in the challenge, and he himself experienced an astounding health transformation, reversing his diabetes.

Dr. Kirt Tyson N.M.D. now is a Naturopathic Doctor who Helps Others Reverse their Type 2 Diabetes

Fast-forward to present day, and Dr. Tyson, N.M.D. now is helping others to reverse their type 2 diabetes and get the same kind of results that he got from switching to whole food plant-based nutrition. 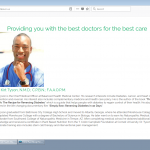 He is an inspiration for any diabetic who wants to dramatically improve their health, including the possibility of reversing type 2 diabetes naturally.

Six people with diabetes from different states around the country volunteered and were chosen to participate in the documentary film in which they joined a 30-day challenge to REVERSE their diabetes and reduce or eliminate the diabetes drugs, insulin, (and blood pressure drugs).

The challenge took place at a natural healing center in a beautiful setting in Arizona, surrounded by mountain ranges in the distance.

(1) The six participants in the diabetes-reversal challenge would eat the delicious, healthy, raw fiber-rich plant-based meals that would be prepared for them daily, three times a day.

(2) They could eat as much as they liked at each of the three meals each day.

The challenge participants ate lots of fiber-filled delicious raw fresh fruit, vegetables, nuts, seeds, as well as avocado. They also had delicious raw plant-based deserts including creamy chocolate deserts. No meat, no dairy, no sugar, no processed foods, no cooked grains, no caffeine. Nothing cooked at a temperature higher than 118 degrees.

It’s worth emphasizing that this film and 30-Day challenge used only raw plant-based foods, which has fewer food options than a whole food plant-based diet. Yet more recent films like Forks Over Knives, What the Health, and Plant Pure Nation, (links below) among many others, show that a much broader whole food plant-based lifestyle can reverse diabetes type 2 quickly and naturally in a short time, with a much greater variety of food choices than just raw plant foods.

The switch to whole food plant-based foods has many health benefits. The Simply Raw 30-day challenge participants experienced dramatic improvements in their lab tests (blood sugar lowered to normal levels), and dramatically improved blood pressure/heart health. They also talked about how great they began to feel, very quickly, upon making this nutritional change.

Challenge participants also described greatly increased clarity and energy, in addition to substantial weight loss. Kirt reported that he had gained muscle by the end of the raw plant-food diabetes reversal challenge.

Upon learning more about Kirt after watching the film, we were even more impressed by the range of his achievements and all that he does.

Before he signed up for the documentary, Kirt had already graduated from Morehouse College with a Bachelor of Science degree in biology.

Inspired to help others reverse type 2 diabetes, after he got off all of the diabetes drugs and insulin in under 30 days as a participant in the Simply Raw documentary, Kirt subsequently earned his degree as a naturopathic medical doctor (N.M.D.).

In addition to becoming a naturopathic doctor, he is an author, an actor (he has appeared both in film and television roles) and a male model (Elite Agency and more recently he signed with the Wilhemina Agency, modeling for Ralph Lauren and many others).

He also has performed at Carnegie Hall in New York.

As a naturopathic doctor, he founded and runs a naturopathic health center in Washington, DC. He also often speaks at conferences and events about the power of whole food plant-based foods and raw plant-foods to heal and reverse type 2 diabetes, heart disease, auto-immune diseases and more.

Kirt Tyson is an impressive person, having achieved so much at such a young age and overcome diabetes.

A major point to consider when watching the Simply Raw film is that their 30-day challenge was restricted to only raw plant-foods. One of the Simply Raw participants seemed to have a tough time transitioning to healthy raw plant foods, an abrupt change after eating very unhealthfully for most (or all) of his life.

It is likely that someone who is put off by the idea of eating only raw natural foods, could do much better eating the larger selections and kinds of foods available in a whole food plant-based diet — not restricted just to raw plant-foods — and still get excellent results in reversing type 2 diabetes, quickly (often reducing or eliminating diabetes drugs within days or weeks, under close medical supervision of their medical doctor).

What is the cure for type 2 diabetes?

If you want to get started right away to learn what it takes to reverse type 2 diabetes naturally, with step-by-step guidance and recipes, read the book The End of Diabetes by Dr. Joel Fuhrman.

Changing your health destiny is a choice, not only to reverse type 2 diabetes naturally, but also to prevent cancer and prevent or reverse heart disease and so many illnesses and diseases including auto-immune diseases and many others, all from switching to whole food plant-based foods.

Read about how Amy Johnson of Frisco, TX (originally from Syracuse, NY), reversed her type 2 diabetes and lowered her cholesterol in only three months, got off the statins and diabetes drugs, healed from osteopenia (she no longer limps, and recently ran a 5K!). It has now been 6 years and she has never been sick once.

Learn More: What is the Cure for Type 2 Diabetes?

Read about how a Mebane, North Carolina Woman Reversed Type 2 Diabetes as part of PlantPure Nation

Read about Joseph Alexander of Rochester, MN who reversed his type 2 diabetes naturally in the 7 Day Rescue Challenge, lost 152 pounds, and now runs in marathons.